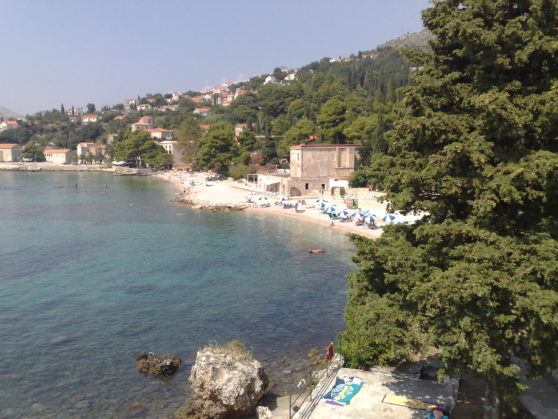 Next year I’ve decided to continue our holiday in Croatia and chosen South Dalmatia region.

Since I was bored living in the same hotel 2 weeks last year in Orebic (this was the beginning of my special passion for hotels :)), I’ve decided to try a new format of staying at hotels: first week in one hotel, second week in another hotel .

The first hotel was Resort Astarea 3 stars, located in the village of Mlini, 10 km from Dubrovnik. When I was choosing rooms in this hotel, there were 2 possible accommodation options: in the main Hotel building and in small cottages by the sea Annex. I’ve chosen the last option.

I really wanted to live right by the sea in order to fall asleep under its noise. As a result, the first few days I could not sleep there, because It seemed to me that the sea is just making a huge noise 🙂 This is what it means when a citizen sleeps right near the sea 🙂

The room we’ve got was quite simple and small. I was especially shocked by the bathroom condition!!! But I understood that this is a 3 star hotel, where there has not been renovation for a long time, but I wanted to get into this place and allow myself a week of rest in the next 5 stars hotel.

And the views from the balcony were great! We had a breakfast-dinner (HB) option. There was a very small selection of food and few tasty dishes. But it didn’t bother us, we understood that 3 stars is most often a roulette and you can get lucky with food or not so much.

Special impression of this holiday was not even from the hotel itself, but from the sea near it. The usual pebble beach, there are rocks in the sea, beautiful views, but at the same time deafeningly cold water in the sea 🙂 After our attempts to crawl there and jump out of there, the local resident told my husband that special underwater keys are beaten here in the sea and that’s why the water in the sea is cold even in August. That is how we knew the secret of successful swimming it to the sea from local that they are taking strong alcohol drinks before entering such a sea 🙂

Mlini village is very small, there is practically no place to walk there, only along the coast. But it is very quiet and pleasant around. It’s undoubted plus is that you can at any moment get out for a walk in Dubrovnik, because Mlini is very close.