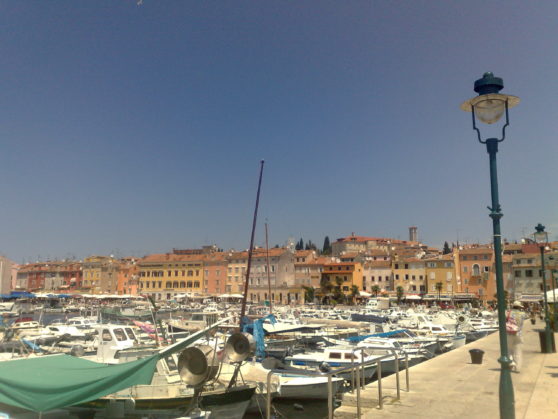 After a successful visits to the southern region of Croatia, I’ve decided that it was time for us to see new regions and chose arrival at Pula airport for our trip.

Pula is located in the north of Croatia, surrounded by the number of sea resorts. For our holiday, I’ve chosen the cities of Porec and Opatija.

In this part I will tell you about our holiday in the suburbs of Porec at the hotel Laguna Molindrio 4 stars.

What we’ve liked about the hotel:
– new hotel with new rooms (as we like 🙂 ) – good food according to the breakfast-dinner system (HB)
– there are 2 open pools (but we practically were not there, because we spent time at the sea) What we didn’t liked about the hotel:
– the hotel stands across the road from the sea (the road is quite busy) – there was no beach near the hotel
– the view of the sea from the room is not quite a direct view, but rather the view across the road to the sea behind it

Due to the characteristics of the hotel, we had to go to the beach at the Parentium hotel every day.

The beaches in Croatia are in communal ownership, which means that anyone can use them. But you had to pay for the sunbeds, which we did. For us it was profitable, because we spent the whole day before dinner there.

But in the classical sense, this beach cannot be called precisely beach 🙂 These are rather platforms made of stones and concrete, which have ladders and descents into the sea. Their advantage is that they hide among pines, so the sun does not burn and there are no umbrellas needed.

We’ve really liked the sea in this place. But we are big fans of such a rocks on the beach and do not see problems in such an entrance to the sea. For many, this is inconvenient, that’s why they were looking for other beaches in the complex, where there was an entrance to the water or on small pebbles or even on sand. But there were much more people on such beaches. We’ve liked so much our bathing among the pines in the purest sea water.

In the same place, we’ve met a couple of lovely elderly guests from Italy, who also liked to swim among such stones, despite their age 🙂

We were happy every evening walking through the hotel complexes of Plava Laguna, Zelena Laguna, in the city of Porec. This is just the place for those who like us, like walking long walks. It was a good week of our vacation, but it was time for us to move to the next hotel and city.