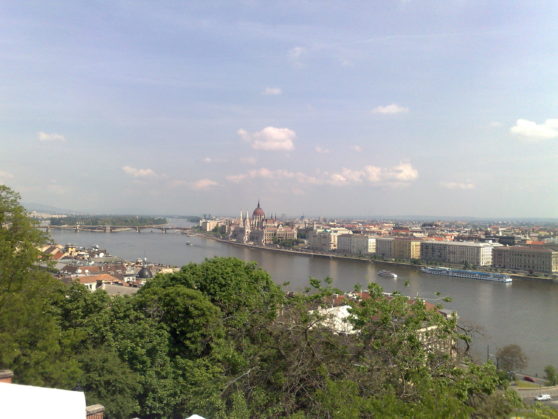 After a successful trip to Poland, I’ve decided to continue our excursion trips to Europe and chose Hungary and Budapest as the next country for our holiday.

To celebrate this, we’ve chosen a trip to Vienna for the whole day. We’ve traveled from Budapest to Vienna with an individual guide by car who drove us back and also showed Vienna.
We’ve liked Vienna and I am sure that we will definitely return there after we see other interesting cities and countries. Budapest in May is beautiful! We’ve walked a lot, visited many places, visited various cafes and restaurants, took many, many photos! For our holiday, I’ve chosen the Corinthia Hotel Budapest.
The hotel is not located in the center, but it is very convenient for walking both to the center and to the Danube, and to Heroes Square and the swimming pools of the Széchenyi.
This is not a new hotel, as I’ve tried to select earlier, but it’s interesting with its atmosphere of a large and elegant hotel. We’ve got a room overlooking the courtyard of the hotel, as it was called double room atrium view. The size of the room was sufficient, but it was already tired and required repairs, but it was kept clean and tidy. The biggest problem was air conditioning. The room was very hot and stuffy, because the air conditioner could not cope with the cooling, and the service departments could not fix it (apparently because of an old age of the air conditioning system of the hotel).

We’ve liked to use SPA center of the hotel early mornings and in the evenings after jogging through the city. It has a huge indoor swimming pool with a good cleaning system and a small amount of people. We gladly swam there and recovered from walking around the city. In the relaxation area there were also saunas and a steam bath with a relaxation area.

Breakfast at the hotel was excellent in all aspects: the choice of dishes, and the service, and the quality of cooking. This is the only hotel where they brought me real cooked hot chocolate 🙂 Despite the hotel’s downsides, we’ve really enjoyed it there, and for our next trip to Budapest for the New Year, I’ve chosen it again.

The New Year at the Corinthia Hotel Budapest was wonderful: the hotel was very beautifully decorated, the atmosphere of a fairy tale was everywhere.
The room was no longer hot, which pleased us. The spa was still as wonderful as the breakfasts.

But I have to admit that going 2 times to the same hotel was a wrong idea, it’s better to choose and see another hotel.

Winter Budapest greeted us with hard frosts, but they did not prevent us from enjoying this city a second time and visiting even more interesting places.

Our discoveries were trips by tram. We’ve bought passes for a week, armed with trams, and rode all routes throughout the city: in sleeping areas, in the center, and in well-known places. Trams in Budapest are new beautiful, understandable, and most importantly is warm. Frozen while walking around the city, we got into another tram and rode.
I definitely recommend this way to get to know Budapest. One of the most vivid impressions of Budapest unexpectedly for me was the local Zoo. I really do not like zoos, I always feel sorry for animals, but this time I was very surprised and glad that there are such good zoos. If you like zoos, I advise you to visit this one.