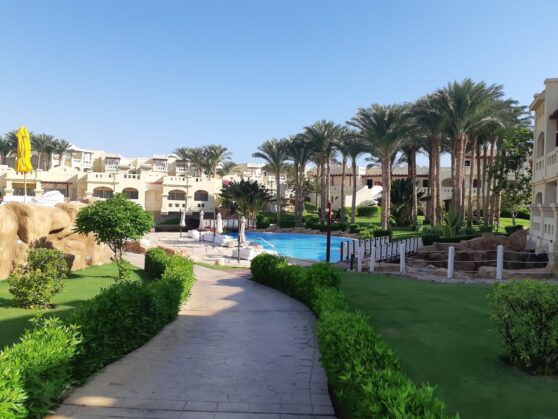 The second hotel on our trip in early October 2021 to Sharm el Sheikh, Egypt was a hotel of the RIXOS chain, widely known in narrow circles. There are 2 hotels of this chain in Sharm, but I chose the one that accepts only adults. Well, I was also very interested to know what the scary Nabq district is, where this hotel is located.

I immediately chose a deluxe room in order to get a room in an understandable place of the hotel – in a quiet building by the relaxing pool. We were not settled right away, we had to wait a bit, because the hotel was almost completely occupied. 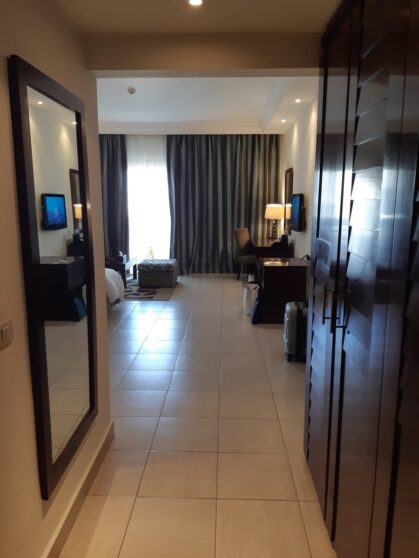 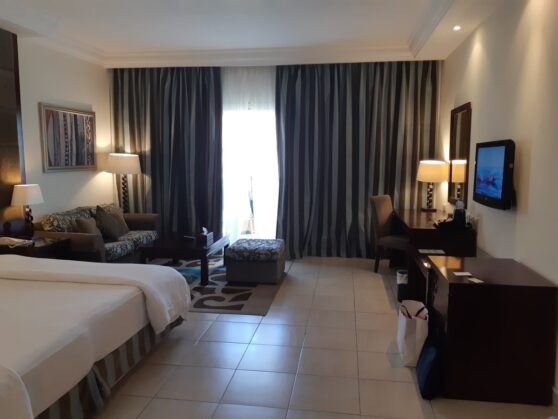 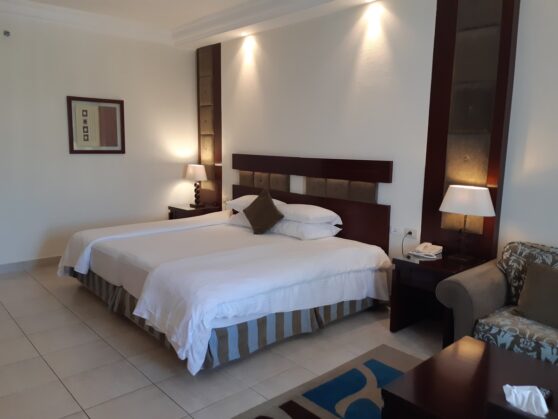 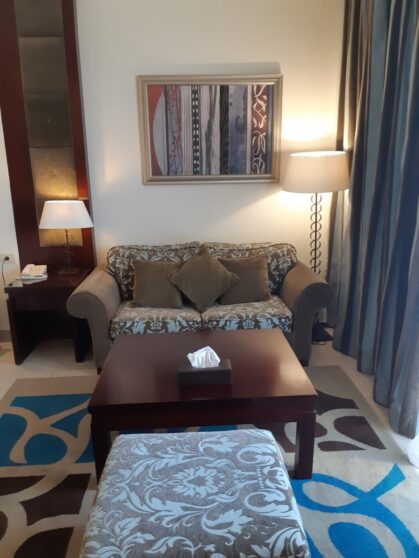 It was cool in the room, and in the morning it was even pleasant to open the door and enjoy the cool breeze. But the noise insulation in the room was not very good; the neighbors could be heard well, as well as the noise of planes that flew, it seems, right above our room 🙂

Also in our room we had a good sized balcony with a nice view of the relaxing pool and building where you could have tea and snacks in the afternoon. 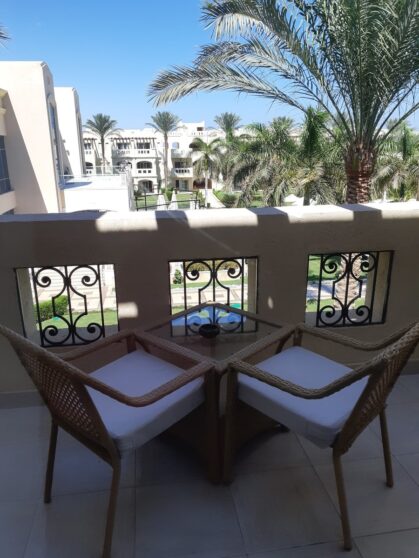 The bathroom has a shower, bath, washbasin, toilet and bidet. Everywhere is clean, there is the usual set of cosmetics and all sorts of little things also available.

The deluxe room is located in the farthest place of the hotel (as if behind the reception, closer to the main road), but we could walk to the sea in 7-10 minutes. 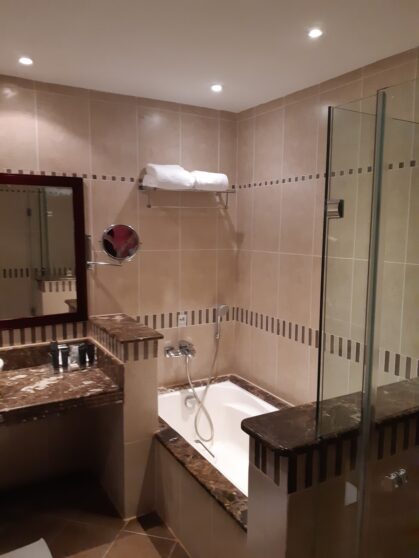 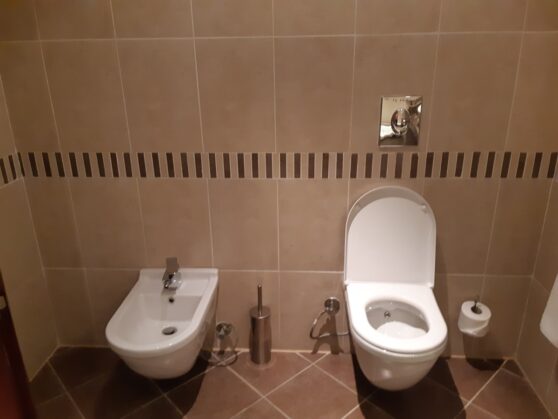 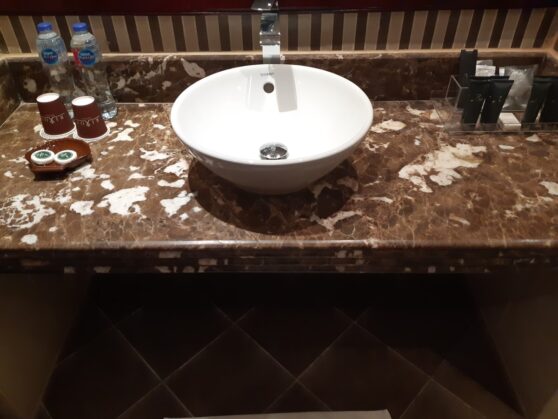 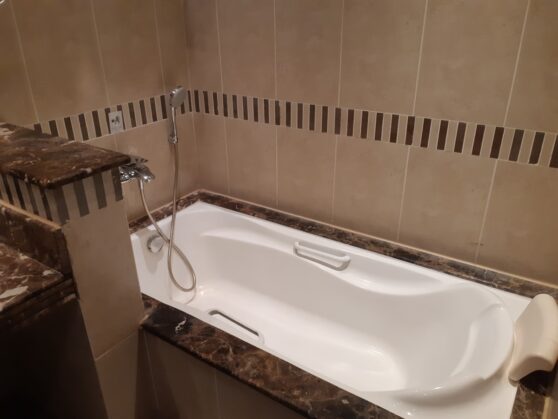 The territory of the hotel itself is stretched from the road to the sea, while it is quite narrow and all consists of hotel buildings with swimming pools in the middle. The pools are large enough, you can choose the one that you like best. 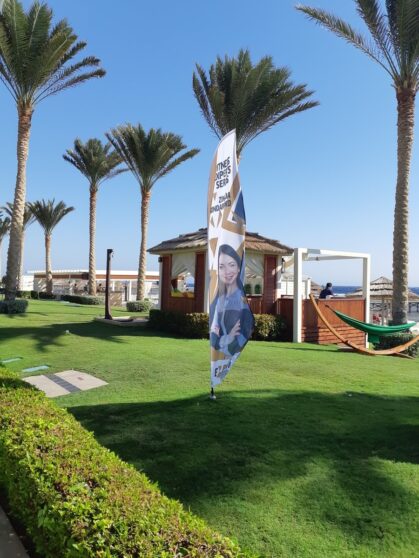 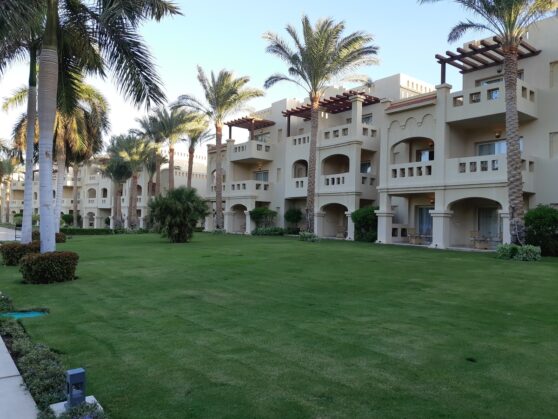 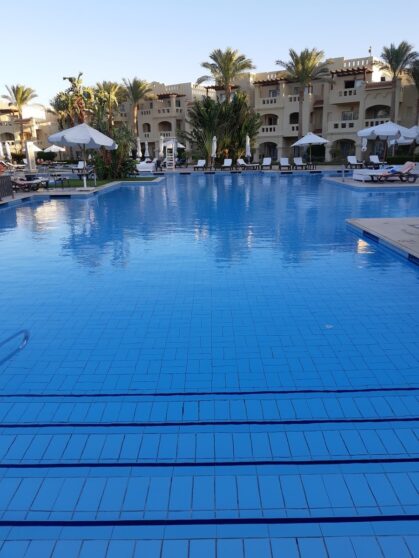 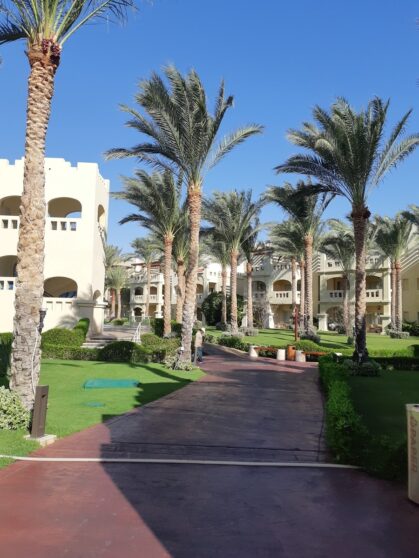 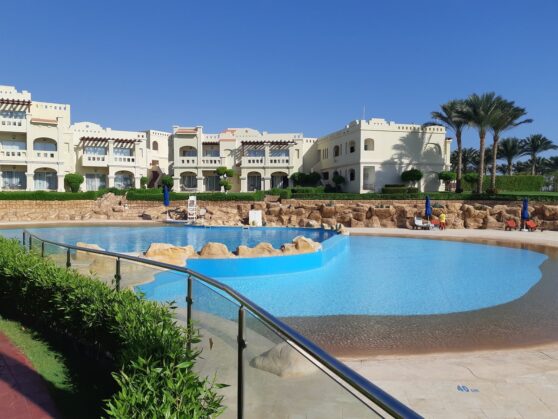 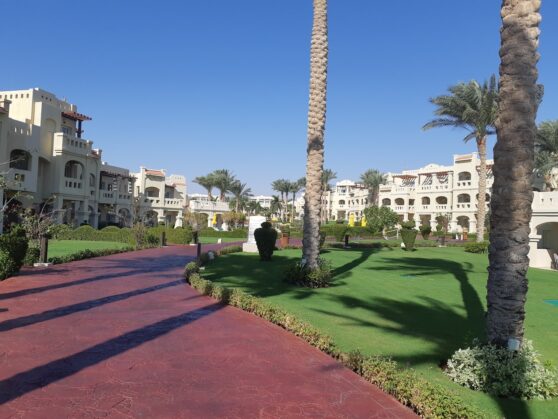 There is nowhere to walk around the hotel, just on the road from the beach to the reception. And there are practically no corners where you can have a good relax time.

Shuttles are constantly running throughout the territory and you can always drive up to any point of the hotel. You just need to be careful when walking around the hotel, because shuttles are everywhere.

The first place we visited was the SPA. This is really the creepiest place in the hotel and needs urgent renovation and rebuilding. We love SPA in hotels, but here we saw a sad picture: a small ancient sauna and jacuzzi, as well as changing rooms. After one visit, there was no desire to return there.

Then we ran to the beach. The beach at the hotel is quite spacious, with plenty of sun loungers and umbrellas. Here is just one problem – the number of umbrellas and sun loungers is not enough for the number of guests who are staying at the hotel. Having got to the beach after 12, we could not find a place for ourselves. The beach workers were not going to help us, we had to go and ask other guests to give an unnecessary sunbeds, and then look for a beach towel that was nowhere to be seen. This is how I immediately got the impression of the service in the hotel and of the hotel itself, from such little things. 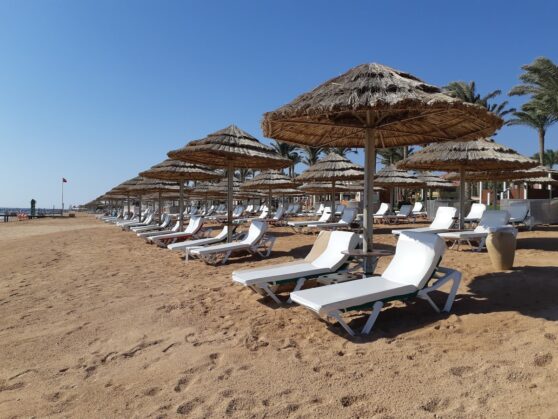 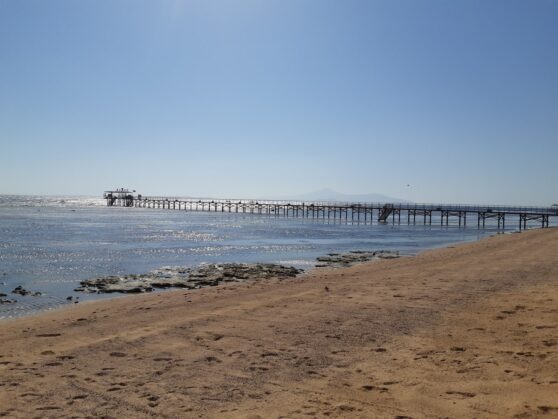 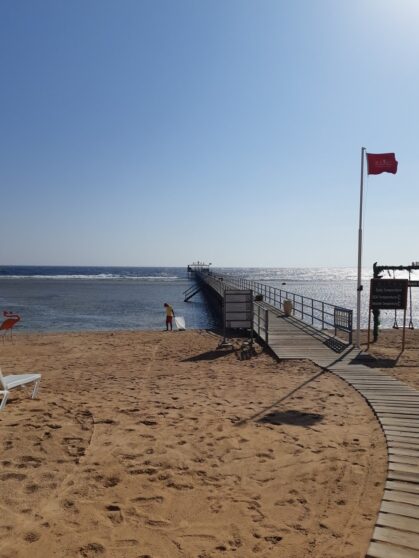 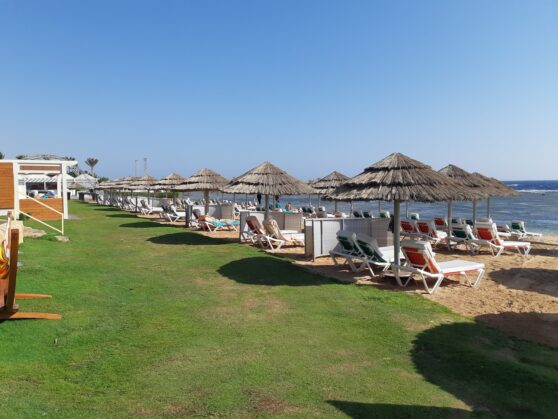 The Nabq area is widely known among snorkelers in Sharm el Sheikh as a place that is completely unsuitable for these purposes due to constant winds, a ban on swimming in the sea and strong currents. But I couldn’t believe it, is it really true? And I’ll tell you honestly – it is! In early October, there was such a strong wind that it even seemed cold. Plus the entrance to the sea at the hotel was only from the pier. The pier was closed almost until noon due to the wind and rough seas.

When it was opened, even we, the brave lovers of the sea, were scared to enter the sea, because the waves were huge and all the time they strove to beat us against the coral wall. The corals themselves are in place, but not particularly interesting and colorful. Due to the waves, there were few fish and it was muddy. And due to the peculiarities of this area, the sun quickly went away and it became dark enough in the sea, which means that it was impossible to see the underwater beauty.

It was a huge shock for us, because we come to Egypt with the most important goal – to swim a lot and look at the underwater world. It was the first hotel in all our trips to Egypt, where we almost could not do it normally.

Okay, we decided, let’s not jump to conclusions and go to the beach bar.
To be continued…