The beginning of my way. Crimea 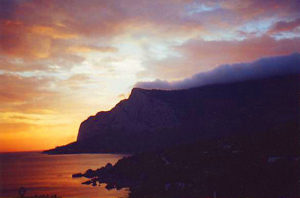 Why I love hotels so much?

To answer this question, I need to go back to the very beginning of my life 🙂

I was born and raised in Kyiv, the capital of my wonderful Ukraine.

At this age was the first time I flew by plane to my grandparents in the Crimea.

Then there were many more trips there, to my second homeland, as well as other trips around Ukraine.

My most memorable place from childhood is my Crimea. I’ve traveled all over the Crimea to different places on the southern coast of Crimea, on its Western and Eastern coasts.

We had vacations with our parents and grandparents, like everyone in those days, in boarding houses, sanatoriums, recreation centers, and stayed in the private sector as well.

We ate in terrible soviet canteen and other slightly more pleasant cafes.

My favorite places in the Crimea are Laspi bay, Aya cape and the greatest impressions were precisely of a holiday in the Emerald boarding house in Laspi bay. It seemed to me that this is the best place on Earth for an excellent holiday: a wonderful sea, beautiful rocks and views, many conifers and greenery, a large territory, a disco and a cinema, a dining room with breathtaking views of the sea and sunsets. The rooms and food were just like everywhere else at those times – modest and not very satisfactory, but then I had no thoughts about hotels and how wonderful and exciting to live in them. When I’ve become older and earned my first money, I’ve returned exactly there, to this wonderful corner, staying at a nearby recreation center, because I couldn’t afford to stay in the boarding house of my childhood, but I was so happy 🙂

Although the food was terrible, my room was cramped and hot, but the joy was real.

Then there were a lot of trips to the new hotels of the Crimea, which became a coup of my consciousness, as well as a real shock from the surprise of how such places are possible in the Crimea, and even built around all of these boarding houses and other soviet surroundings.

It turned out, it is possible and it is real! Our favorite places with my husband were such hotels as Palmyra Palace, Respect Hall and the Sea. We were pioneers in them and visited them immediately after the opening (I was waiting for something like that and really believed in a miracle), and then repeatedly returned to my favorite places to spend the weekend there, celebrate the New Year and other pleasant trips.

* I apologize to all that the photos in the post are of very low quality, because shot was made with a cheap camera.